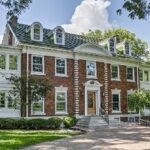 The Georgian Revival house across from Loose Park was completed in 1922, but we don’t have the architect’s name. The first family to live there was Guy H. McCanles and his wife Marie and their children. He was a contractor and developer who specialized in apartment construction in Kansas City, but he also erected over two hundred residences between 1907 and 1912. One of the apartment buildings was the Raphael on the Plaza. He employed Hare & Hare landscape architects to develop the grounds around the house.

In 1944 William Neil Barron and his wife Gladys and their two children bought the house. He was the owner and operator of Neil Barron Fuel Company of Kansas City. In 1946 they moved from Kansas City to Liberty, Missouri, and he became engaged in farming and cattle raising while serving as president of North Hills Bank in Antioch.

In 1946 Jay E. Minton and his wife Elizabeth took ownership. He was an insurance executive and served as vice president of Lynn-Wells Underwriting Company. Later he and his wife moved to Texas where he again worked in the insurance business. He also applied for membership in the Sons of the American Revolution.

In about 1949 John Charles Newby and his wife Falba moved into the house and enjoyed it in the 1950s and 1960s. John Charles was known as “Jake” to his family and friends. Early in his career he was a director of Peppard Seed company which was known for its bluegrass seed all over the world. Later he joined his father and brothers in the family firm of Newby Brothers at Plattsburg, Missouri, which was one of the largest cattle feeding businesses in the country. He once visited the White House when Harry Truman was president when he served as a stabilization chief of the Beef Conference.

Falba Newby was a formally educated organist who loved to share her playing at the holiday season. In September 1955 the Newbys celebrated their 25th wedding anniversary with a gala open house for two hundred guests. They had the top organists in the city play during the evening, and the music was amplified throughout the rooms and out-of-doors which re-created Mrs. Newby’s custom at Christmastide when she herself played the Hammond organ.

In 1974 the Newbys moved to Plattsburg, Missouri and sold the house to Dr. John W. Davis, DDS, and Jacqueline H. Davis who had two small children. They removed partitions and appliances that had been used for apartments and found that the vines in front of the house had migrated into the interior. They also took apart the front steps and had them reinstalled. They were careful to keep all the fireplaces, some of which had been boarded over. Jacqueline (Davis) Kraft recalls that when windows were open, they could smell the roses from Loose Park. Dr. Davis died at age 49 after moving to Chicago to take an advanced degree. Jacqueline worked as a news writer in radio and television in Kansas City.

In 1977 the Davis family sold the house to John Paul Jones and Martha Walsh Jones. JP was an attorney who switched careers to become a commercial airline pilot with United Airlines. His mother was Russell Stover’s sister, and his father served as president of the candy company. JP and Martha had two young sons who enjoyed watching the weddings at the Loose Park rose garden and remember sliding down the front bannister and riding trucks on the third floor.

Martha recalls that they lived in the house during the Plaza flood and the roof leaked. While the kitchen was being remodeled by Kitchens by Kleweno, it seemed as if there was a plumber there every day and she had to take the children out to eat. However she was pleased with the result and enjoyed the white painted beams.

In 1981 John R. and Vicki Bondon bought the property and added the pool and gazebo. John is noted for owning and operating the Italian Gardens restaurant in downtown Kansas City where everyone went to see and be seen. Vicki (Bondon) Tomblinson raised Arabian horses and later longhorn cattle. She remembers adding the wrought iron address signs for the house. She also recalls the fish pond below the pool where she raised koi and the waterfall leading to it.

In 1985 the house was sold to Stephen M. and Jennifer B. Dunn (no relation to the J. E. Dunn family).
Stephen was in commercial real estate and Jennifer worked in the business while raising their daughters. They converted a second floor sunroom into the master bedroom and finished the third floor for a playroom and guest room.

The eighth owner of the house was a rising female vice president who reported directly to the chairman of the board of Sprint. She acted as her own general contractor for changes to the house and the addition of an apartment for her mother in the carriage house. She won a design award for this creative use of the space. The apartment is now gone but a round stained glass window is still visible on the second floor. It is actually composed of two fan-shaped windows from a house in New Jersey which she installed as a round window. She enjoyed motorcycle riding and once had a gentleman arrive on her doorstep with bouquet in hand asking if the Range Rover in the drive was also hers. He tendered his hand in marriage but she declined. From Kansas City she moved on to Minneapolis to take a position with Pillsbury and later to various corporate posts which allowed her to redo many more houses in Washington, Virginia, Georgia, and finally in Florida.

In 1993 Larry and Nancy Kauffman purchased the home but lived there only until 1998 because of Larry’s untimely death. Larry was the son of Ewing Kauffman, owner of the Kansas City Royals baseball team, and was himself an entrepreneur with an avid and personal interest in baseball. He owned the Kauffman Baseball Academy in South Kansas City but was also active in the construction and automotive parts and repair business. Nancy Kauffman DuVall has spent most of her life raising awareness and funds for agencies that address child abuse and domestic violence. She currently is employed by the Child Protection Center. She was also a hostess for many social events at the house including a holiday season with beautiful Christmas decorations that was featured in Kansas City Home Design. Perhaps her most poignant addition to the house is the series of murals in the foyer which has a panel above the door incorporating the letter “K.”

Scott and Susannah Salmans acquired the house in 2000. They joke that they came with three children and left with six including an adopted child. The Salmans operated a health education business from their home and were able to use the existing apartment as an office. Scott has an Executive MBA from UMKC and says that they used every inch of the house. Susannah was happy to expand the kitchen and used Kitchens by Kleweno to add the marble island, kitchen hood, and pot rack. They were also able to add more upstairs closet space above the expanded kitchen. Eventually they decided that it was time to return to Texas where they now reside.

The present owners are Dr. Scott Cozad and Dr. Shavonne Danner. Scott retired from Therapeutic Radiologists, and Shavonne is an anesthesiologist specializing in pain management. They oversaw extensive renovation to the residence, including moving the laundry room to the second floor, renovating all five bathrooms, and adding a sixth on the main floor. Improvements also included all new Pella windows, custom backsplashes in the kitchen, and the addition of the third garage bay and breezeway in place of the apartment. They have moved to an apartment in the Crossroads while deciding on their next home. We thank them for sharing this Kansas City treasure for our 50th year.