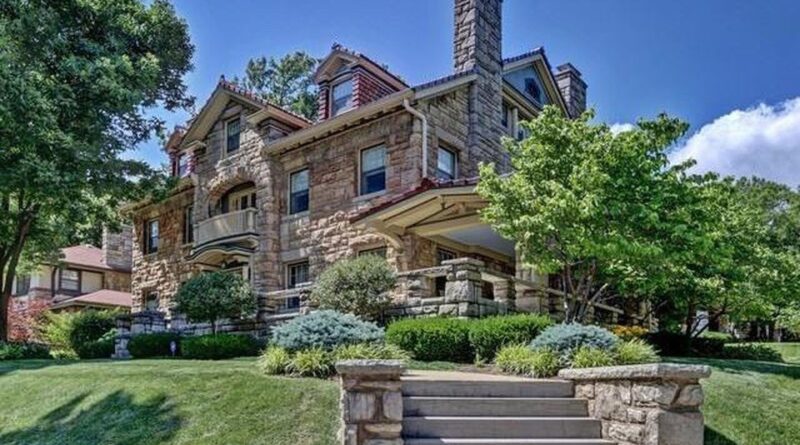 The Story of the 48th Symphony Designers’ Showhouse 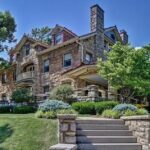 The building of the large limestone house at 816 Gleed Terrace, Kansas City, Missouri was begun in 1908, but we don’t find a listing of occupants in the City Directory until 1910. This modified colonial revival home was one of the earliest houses in the newly platted Hampden Parkway addition to Kansas City in the Hyde Park neighborhood.

The limestone for the building was likely of local origin. Kansas City sits on a large bed of limestone that was created 300 million years ago as marine fossils decomposed at the bottom of a shallow body of water that covered most of the Midwest. In her Kansas City Star article in October, 2016, Cynthia Billhartz Gregorian featured limestone as a popular building material. Cydney Millstein, an architectural historian, reminds us that Kansas City had a number of limestone yards in the area by 1886 which equaled the number of brickyards. Another important building material is the Ludowici Celadon tile roof. When part of it was replaced, the roofers found that the back of each tile was numbered. The color of the roof at 816 Gleed Terrace is the only one of that particular hue in Kansas City.

We do not have a record of the architect of the house, but the projected cost for the 5,646 square feet dwelling was $10,000. However, this nice round number was probably meant to bring the house into compliance with real estate covenants of the time which required that building costs be at least $10,000, no more than one house per lot and no apartment buildings. The entrance was to front on Gleed Terrace and be set back at least 25 feet.

The address of the home was not always 816 Gleed Terrace; it was once 3660 Campbell Street in the City Directory. “Gleed Terrace” is a two-block street that does not exist anywhere else in Kansas City. It was named for Charles Sumner Gleed, one of the owners of an early Kansas City newspaper, the Kansas City Journal. He was also a director of the Atchison, Topeka, and Santa Fe railroad and one of the first presidents of the local telephone system.

The history of the Hyde Park neighborhood was influenced by a natural cave spring which supplied water for travelers just a block from here but was covered over for safety reasons. It was on a popular road coming from Independence to Westport which was separate from Kansas City. John Calvin McCoy who platted Westport once owned some of the land here. The property changed hands many times as Missouri became a state in 1821 and settlers poured in.

By the 1880s Westport was now merged into Kansas City and there was an effort to establish a municipal park and boulevard authority. William Rockhill Nelson wrote about a park in the midst of the city in his newspaper, the Kansas City Star. Planning was begun by August Meyer for a boulevard system and by George Kessler for a park system which could be built in a leisurely fashion without economic pressures. The long, skinny public space known as Hyde Park went from about 36th Street and Gillham Road (named for Robert Gillham, a former park commissioner) south to about Brush Creek. The first municipal golf course in Kansas City was located at 36th and Gillham in the ravine between the north and south lanes of Gillham Road (see historical marker). Just a few blocks to the east you will find Janssen Place, once a private street called “Lumberman’s Row” for the mansions owned by leaders of the building trade. Because of its outstanding residential architecture, Central Hyde Park was added as a Historic District on the National Register of Historic Places on November 21, 1980. To learn more about this neighborhood, read Kansas City’s Historic Hyde Park by Dona Boley and Patrick Alley for the Hyde Park Neighborhood Association or take the Hyde Park Homes Tour in the fall of each year.

The builder of the house started in 1908 was Edward T. Hubbell and his wife, Lydia. The “T” stands for “Townley” and he was vice president of the Townley Metal & Hardware Company. His family included Ernest Hamand Hubbell and James Townley Hubbell, and they lived here until 1917.

Gerald G. Conway and his wife Josie lived here a short time in 1920 along with a son, Lawrence, who was a car salesman and his younger brother, Gerald, Jr. Mr. Conway was vice president of Peet Bros. Mfg. Company, the soap people. According to the 1920 census they had an employee named Mattie D. Bolten who is listed as mulatto.

From about 1921 to 1931 Benjamin L. Hart and his wife Lula lived here with their children. Mr. Hart was a real estate developer who died in 1931. The house was bought by one of his daughters, Nelle Virginia Armsby and her husband Carelon who was employed by ABC Finance Company. They lived here until 1940. We are guessing that the Hart family commissioned the mural painter Larry Richmond to do the cowboy mural on the wall going down to the basement from the kitchen. Mr. Richmond studied at the Kansas City Art Institute in 1925 and later with Grant Wood (“American Gothic”) in Iowa.

William G. Gregory and his wife Anna lived here from 1941 to 1952 when they moved to Indiana where they bought a big farm. Mr. Gregory was vice president and general manager of Binkley Coal Company. In the basement is a large coal bin with an auger/conveyor to take the coal to the furnace.

In 1952 the owners were Stanley E. and Lorene A. Smith. This begins the era of sub-dividing the house into four apartments where young professionals, particularly in the airline industry, rented space. Some are listed in the City Directory as “TWA hostess” or “Braniff Airlines.”

The next owners were James and Ruth Kidwell from about 1966 to 1976. They had a number of tenants who were employed at Hallmark Cards, Continental Oil, or were students. Mr. Kidwell was a truck driver with Graves Truck Line.

In 1976 Tom and Linda Becker, newly married and he fresh out of law school, moved to Hyde Park which became their home for nearly forty years. Tom practiced law with the Stinson, Mag & Frizzell firm, and Linda worked for the Kansas City Landmarks Commission and educated people about historic preservation and later joined Historic Kansas City Foundation. Tom was active in rezoning efforts to restore beautiful old homes to single family occupancy and worked on the complicated project of bringing Costco and Home Depot to midtown.

In 2016 the Beckers sold the house to Casey and Abby Ventrillo who are lovingly creating a new kitchen and are lending this remarkable home for the 48th Symphony Designers’ Showhouse. They are native Kansas Citians and dreamed of living in Hyde Park. As students they started attending symphony concerts, and their mothers enjoyed going to Symphony Designers’ Showhouses.

As you leave the historic Hyde Park Neighborhood , please take a few minutes to admire the beautiful Harrison Parkway which winds its way through the area, the handsome homes on either side of 39th Street, and the iconic Eagle Scout Memorial and fountain at 39th and Gillham Road. It was once the Seventh Avenue entrance sculpture at the New York Pennsylvania Railroad Station before its demolition.