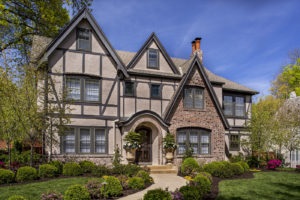 The building permits for the English Tudor house at 444 Westover Road were taken out by H. E. Hucke in 1925. Mr. Hucke was a son of George Victor Hucke who owned George Hucke & Sons contractors. One of the firm’s other prominent buildings is the apartment building at 4533-39 Roanoke Parkway on the Country Club Plaza.

A variety of families have owned the house beginning with Walter T. Scholler and his wife Helen. Mr. Scholler was a buyer for the well-known department store of Emery, Bird, Thayer in downtown Kansas City, Missouri on Petticoat Lane.

The next owner was Paul C. White and his wife Ann. He was a supervisor with the Fidelity Investment Association in the 1930s and ‘40s.

Following the Whites were John M. Culver and his wife Audrey. He was with Columbia Steel Tank Co.

In the 1950s Russell Comer and his wife Eloise operated the Russell C. Comer Advertising company. Eloise attended the Minneapolis Art Institute and while in Kanas City she was a part of the “clean sweep” movement which battled the Pendergast political machine. She was chairman of the Women’s Division of the Charter Party, a reform organization. She was also the author of several national radio shows and published some fiction. When Mr. Comer died at age 54, she became president of the advertising agency, Russell Comer Radio Productions and Jimmie Allen Enterprises, a TV production company. She was honored by the University of Missouri for furthering the progress of women in business. In her later years she became interested in the problems of the elderly and became president of Service Corps for Senior Citizens. She also continued her interest in the arts and showed her paintings at various art fairs.

The Comers’ daughter, Twila Pollard (Mrs. Alec Pollard), still lives in the Kansas City area and celebrated her 90th birthday on March 29. She was in New York pursuing a career as a singer and dancer during the early days of television. Her family was excited to see her on the Arthur Godfrey Show. Twila was married in the house on New Year’s Eve, 1949. Her children subsequently were all married on New Year’s so they could celebrate their anniversaries together. She recalls that her father worked with Walt Disney in California and they looked somewhat alike because of the mustache. When the family dined in California, they always got a good table. Twila recalls that the family had two grand pianos in the house—one in the music room and one in the dining room.

The Comer family was followed by John F. Duncan and his wife Sarah. He was president of the Plaza Bowl Investment company.

In the middle ‘60s James W. Meade and his wife Bonnie acquired the house. He was Assistant Director of Research Hospital.

From 1965 until 1999 Col. Meyer L. Goldman and his wife Rosa-Ray Goldman lived in the house with their children, Max and Judy-Anne. In 1956 Meyer L. founded the Kansas City Labor Beacon where he was publisher and editor until he sold it in the late 1980s. Meyer L. and Rosa-Ray met when she came to the Nelson-Atkins Museum for a commission. In addition to being an artist she was also a master gardener who belonged to the Loose Park Herb Study Group and the Kansas City Rose Society. She was also active in the Military Officers Association of America and Hadassah. She loved the outdoors and enjoyed fishing. Col. Goldman was a musician who enjoyed playing piano in the music room several steps above the living room. In addition to a Steinway they also had an organ, and Judy-Anne later had a harp and took lessons from a neighbor. The family enjoyed going to the Kansas City Philharmonic and the Kansas City Ballet. Col. Goldman also had a darkroom in the basement. The family’s 16-mm film projector was set up in the living room to show reel-to-reel movies projected on a screen that could be pulled down over the windows in the music room. The Goldman family closed in a screened porch to make a new bedroom and bath for an elderly relative. The front yard on the corner of Pennsylvania and Westover was often photographed because of the crab apple and mimosa trees.

More recent owners of the house have been Nicholas and Cynthia Spaeth who expanded the rear of the house, doubled the square footage, and added the third garage.

When David and Noelle Manica purchased the house in 2009, they only had some cosmetic renovations to make but embarked on some major landscaping. The Kansas City Symphony Alliance is happy to share this beautiful home with the public after the wonderful decorating by area interior designers and landscape artists. Thank you to the Manicas for providing their home to us.