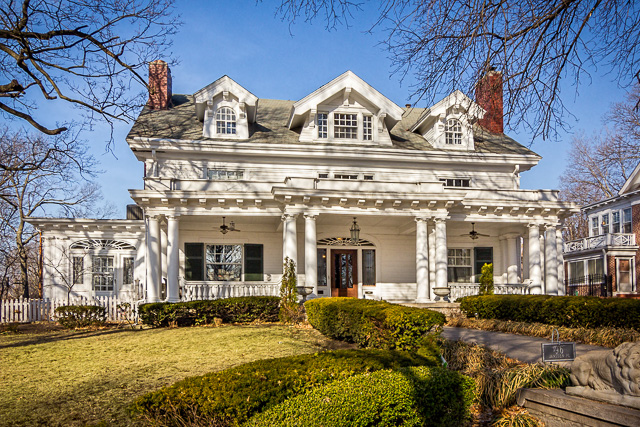 At the turn of the 20th century when 36th Street was the city limits, Kansas City began to expand southward into planned residential areas such as Hyde Park and its crown jewel, Janssen Place. Between 1897 and 1917 Janssen Place attracted many wealthy individuals, many associated with the lumber and construction profession—thus its title “Lumberman’s Row.”

Arthur Stillwell was the developer of Janssen Place and placed rigid restrictions on the size, cost, and placement of the dwellings. Outdoor wiring was buried instead of being carried on poles. It was an outgrowth of the City Beautiful movement that inspired the parks and boulevards system. The street is listed as an historic district by the Kansas City Landmarks Commission and is on the National Register of Historic Places.

The house at #96 Janssen Place was built in 1911 by William C. Bowman, president of the W. C. Bowman Lumber Company, and his wife Catherine and was designed by Shepard, Farrar & Wiser. It is a colonial revival style house with nineteen Doric cast iron columns arranged along the front porch. The exterior is wide clapboards made of yellow pine, and all the interior trim is mahogany.

As the golden era of growth and prosperity passed, Janssen Place did not escape the shadows of the 1929 stock market crash. During the great depression the house stood vacant for several years. In the early 1940s John T. Barker, a prominent Missouri lawyer and his wife Mayme lived in the home. He was attorney general for the State of Missouri and in the 1920s served as City Hall counselor during the Pendergast era. At that time he became acquainted with Harry Truman and later served as special assistant in the U. S. Attorney General’s office. At his funeral in 1958, his honorary pallbearers included

During the 1950s the Fred K. Shibley family shared the house with five children. He was Vice President and Treasurer of the Kansas City Bridge Company which built the Liberty Bend Bridge across the Missouri River. The children used the ballroom as a play area and slid down the mahogany banisters. The sunroom was used for Christmas and other family gatherings.

In the 1960s the house was owned by Mrs. Lou Caceres and converted into sleeping rooms and apartments for young professionals. She lived on the first floor with her mother and aunt and raised Pomeranian dogs. She also had a bird that wolf whistled at tenants when they entered the house.

In the late 1970s James and Joyce Murray bought the house and converted it back to a single family dwelling. Jim was the art director at The Kansas City Star, and he and Joyce, a teacher at the time, used to come home from their day jobs, don old clothes and tackle renovation projects. They hosted many social events and community meetings in their home.

Since the 1980s the house has been home to several young families which left their mark on the interior.

31st showhouse. In the intervening years she has added a swimming pool and pool house. The house is now on the market and Carol has graciously invited us back. We hope you will enjoy this house and the unique private street on which it stands.