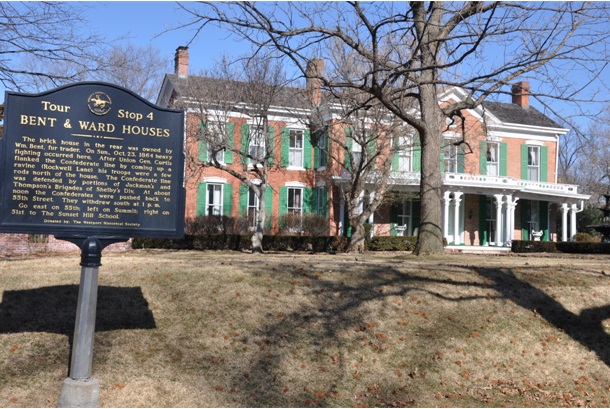 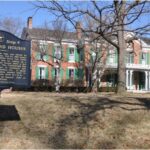 The history of the Bent-Ward House is a microcosm of American history from Native Americans to the “Mormon Wars,” the move west for trading and trapping furs, the Battle of Westport during the Civil War, and the expansion of Kansas City, Missouri to the south by the 1900s to develop exclusive residential neighborhoods.

The property on which the Bent-Ward House sits was purchased in the early 1830s by Mormons who believed that the second coming of Christ would be in Independence, Missouri and that they should buy land to the west and convert the Native Americans. They didn’t have much luck converting the Delaware Indians and were ordered by the U. S. government to pull their missionaries out of Indian territory. After the “Mormon Wars” in 1838 when they were expelled from Missouri, they tried to get some compensation for their real estate, and one of their attorneys was Alexander Doniphan from Clay County, Missouri. He ended up with this property in lieu of legal fees and sold it to a Westport farmer named William Matney. There seems to have been a brick structure on the farm in the 1830s.

In 1858 the farm was purchased by William W. Bent, a famous frontiersman, trader, and fort builder who erected a bigger two-story brick structure. He had been serving as an Indian agent and freighter and outlived two Indian wives. One of them by the name of Owl Woman provided much Westport gossip with her “dashing equestrian habits and preference for sleeping in a tepee.”   The latter comes from TheMountain Men of the Fur Trade by Merrill J. Mattes from the National Park Service.

As it happens Bent was not at his farm when the Battle of Westport was fought in his cornfields in October, 1864. General Sterling Price’s Confederate line was north of his house, but once breeched, the farm quickly became a battleground. From his book written years later, John Edwards says that “Slayback had just returned from a bloody assault upon a large brick house, which he carried with the revolver, and which was the key almost to Shelby’s position.” Thus the house was gained by the Confederate forces. Later the tide turned and Col. C. W. Blair in his report dated November 25 describes his recapture of the house: “A heavy fire was here opened on us from a corn-field which stretched from our right front, and which seemed filled with skirmishers, and from a large brick house in an orchard just beyond, in which a party of sharpshooters was stationed. In a few minutes several of our men had fallen, and the fire was incessant and close. I immediately ordered the right of the brigade forward and drove the enemy from the corn-field and the house.”

Bent died in Colorado in 1869 and is considered the first permanent white settler in that territory. His third Indian wife survived him and sold the farm in 1871 to the wife of another trapper-trader, Mrs. Seth Ward.

Beginning as a buffalo hunter and trapper around 1838, Seth Ward began loading wagons with trade goods to do business with the Indians. In 1857 he began as a sutler at Ft. Laramie, Wyoming and returned to Westport around 1870 as a rich man. He married Mary Frances Harris McCarty, the widowed daughter of John Harris, the Westport hotelkeeper.  In The Mountain Men there is a description of Ward’s “frontier custom” of marrying a beautiful native girl named Wasna perhaps in the 1840s which produced four children, but she died young of tuberculosis. After her marriage to Seth, Mary Frances sometimes stayed with her sister Josephine and brother-in-law Charles Esmonde Kearney at the Harris House on Main Street at Westport Road with some of the younger Indian children who were schooled by Albert Gallatin Boone in Westport. In the 1920s the Harris House was moved to 4000 Baltimore, Kansas City, Missouri, where it is a museum today.

Now to the story of Seth Ward’s beard. During the Civil War he was a southern sympathizer. On his way from Laramie to Kansas City he heard about the Battle of Bull Run. He told his wife he would never shave until the Confederacy had won its freedom. He said later, “It didn’t win and now I am glad of it, but I have kept my promise about my whiskers.” After the Civil War the Ward sutler’s store at Fort Laramie was the headquarters for all visitors. In The Mountain Men it is described as a store and chief banking institution for hundreds of miles around. S. E. Ward trade tokens, stamped on one side only were used to facilitate trade and are treasured by coin collectors.

After acquiring the Bent farm in 1871, Seth Ward built the front of the current house from a Greek Revival design by architect Asa Beebe Cross. The previous Bent home probably built about 1858 was a two story square brick house which was retained in the rear as kitchen and servants’ quarters. Some Italianate alterations and later additions partially modified the original appearance of the Ward dwelling. One of his sons, John E. Ward, was an invalid most of his life, and it is believed that the west addition to the house consisting of a replica staircase, sitting room, and bedroom were added for his convenience.

Retiring from the frontier, Ward first became a banker and then formed a real estate development company in 1902 which took ownership of the property. After he died in 1903 the house was used as an office by the Ward Investment Company. In 1915 the house was leased to and occupied by the D. L. James family, distant cousins of the Wards. From 1897 to 1926 part of the Ward land was used as a golf course of the Kansas City Country Club. Some of this land is today part of Loose Park. The company retained Ward’s house and immediate grounds until 1940 when the property was transferred to two of Ward’s grandchildren. The grand boulevard called Ward Parkway was named for Hugh Ward, one of Seth Ward’s sons. As a child Hugh Ward was painted by George Caleb Bingham, and his portrait is still retained by the family in Boston. Bingham also painted the infant daughter of Seth and Mary Frances Ward, and this portrait of the young Mary Frances who died as a child is owned by the Nelson-Atkins Museum of Art.

In 1942 ownership passed from the Ward family to Mr. and Mrs. Leland W. Browne. He was president of the Darby Corporation, a producer of structural steel, until 1949 when he moved to Omaha, NE and sold the house to Dr. and Mrs. Frederick B. Campbell who did extensive historic restoration. It was added to the National Register of Historic Places in 1978. Dr. Campbell was a much respected colon and rectal surgeon. He was former staff president of General Hospital and founded the colon and rectal clinic. He later served as staff president at Research Medical Center and St. Mary’s Hospital. His wife Clela Gillett Campbell served on the auxiliaries of St. Mary’s Hospital and the University of Kansas Medical Center. They raised a son, John G. Campbell who followed his father in medicine, and two daughters. Dr. John Campbell died on January 25, 2013, and his son Fred Campbell has shared photos of the family. Another grandson of the Campbells, Fred Conboy of Lawrence, KS, remembers exploring every nook and cranny of the house and the grounds. Mrs. Clela Campbell was noted for her particularly beautiful flower gardens. She was just as meticulous with the interior of the house with the second floor landing being furnished in primitives and the rest of the house furnished in antiques. Unique among them was a huge iron stove in the kitchen which came from the Gillett family in Burr Oak, KS.

Fred Conboy remembers a bundt cake lying on top of the stove in a Hershey chocolate tin.

In 1983 the house was purchased by Mr. J. Nelson Happy of New York who began extensive repair of structural and mechanical systems. The next year he and Mary Matthews, his business partner and an architectural historian, were married in the side courtyard. The home was Showhouse XVI in 1985 and was bought by Robert and Sandra Gaines in 1986. They have enjoyed living there for 27 years and sharing their home for Showhouse XXXXIV.